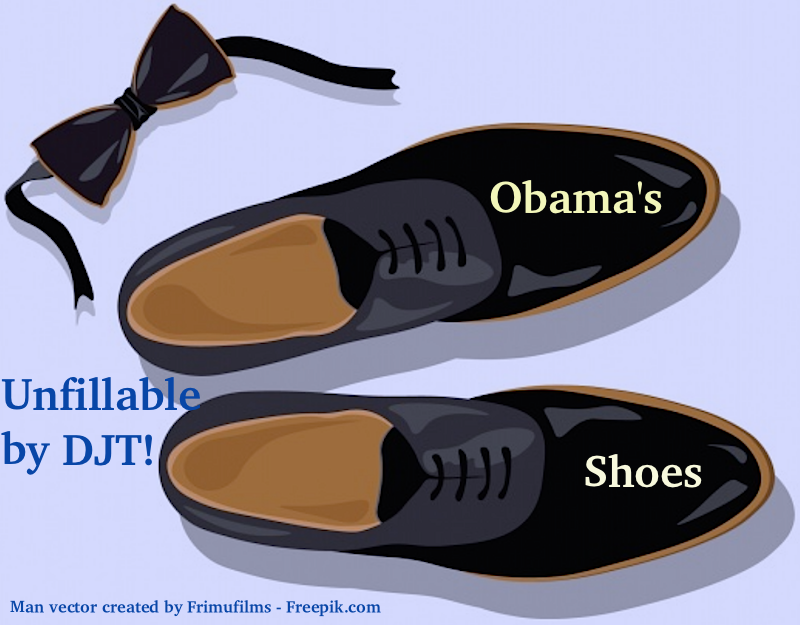 No! Trump Will Never Be Able To Fill President Obama’s Shoes––No Matter What Size He Wears!!

Why is it that #CrookedDonald Trump, his supporters, and their childish petty behavior continue to show hostility toward our former President, Barack Obama, despite his posing no visible threat to any of them as of the day of this writing? This misplaced animosity continues despite the fact the Federal Bureau of Investigations Director James Comey testified (March 20, 2017) that the Trump campaign is under investigation for colluding with Russians regarding 2016 presidential election interference in the United States. Barack Obama has never been under investigation. Nor did he ever have a scandal during his eight years as president. In contrast, Trump scandals preceded his White House coup and continue to stack up almost daily.

One could lay out a case suggesting the fact that the nation began and continued to prosper throughout Obama’s presidential reign despite six years of right wing obstructionism enacted by unpatriotic republicans vying to see him fail represents a proverbial pair of shoes for the illegitimate guy now occupying the white house to fill. But Trump and his minions seem to believe governance mainly by enacting racist policies; detracting from the American people’s rights, signing documents to pollute our lands and seas, and dismantling the United States of America’s democracy will somehow elevate Trump to a position that surpasses President Obama’s legacy. Of course, this will never happen. Trump will never be able to share or surpass Obama’s standings because he, Trump, demonstrably lacks the intellect, temperament, and overall capacity to mirror, never mind to surpass, one of the greatest presidents the US has ever been fortunate to [actually] elect, Barack Hussein Obama––who was a President for ALL OF THE PEOPLE––not just a few––and whose mission aimed to better not to hamper people’s lives.

Those paying attention know it didn’t take long for Donald Trump’s lack of competency to present itself [and in numerous ways] after he illegitimately overtook the presidency via the 2016 Russian assisted coup. A couple of the most notable, perhaps, being (1) his failed attempt to take down al-Qaida leader, Qassim al-Rimi and (2) his unconstitutional immigration ban.

Trump’s botched attack to take out Qassim al-Rimi in Yemen led to a fiasco for which a virtual Murphy’s Law affect occurred leading one reporter to describe the disaster by stating that “…almost everything that could go wrong did.” What’s more is that one former SEAL Team 6 official said “They kind of knew they were screwed from the beginning.” In addition to a Navy SEAL, as many as 30 people including innocent civilians were reportedly killed. The deceased included women and at least ten children. Despite controversial claims that the mission captured computers and other data it appears that in reality the main focus of the mission was a total failure and according to NPR.org, the chaotic operation “drew sharp criticism from Yemeni officials who usually support the U.S”. Merely an embarrassingly few days later, Qassim al-Rimi, the target who was supposedly killed, in a show that he was still alive and well, put forth an audio message in which he mocked Trump as a ‘fool’ who got ‘slapped’ also reportedly the fool of the White House. Worth mentioning is that Trump lost a $75,000,000 helicopter during this unsuccessful assault.

Trump’s first immigration ban aimed to prevent Muslim refugees and travelers in general from seven designated countries from entering the United States causing hundreds, if not thousands, to be detained or stranded at airports for a racist policy that goes against American values by discriminating against a group of people because of their religion but disguised as a travel ban aimed at protecting the US was rightly slapped down by the courts.

This illegal ban caused chaos in the US and around the world during the first day of the policy enactment alone as well as hundreds of thousands if not millions of protestors to take to the streets, not only in the US, but across the globe as well. And what could be worse than a decision that prompted more than 1.8 million British citizens to sign a petition requesting Trump not be allowed a formal visit to the United Kingdom and forced a parliamentary debate on whether to deny him a state visit hosted by the Queen. The petition was intended to scrap or downgrade a Trump visit stating Donald Trump's presence “would cause embarrassment to Her Majesty the Queen.” The unfortunate debate took place on February 20, 2017 and to be clear about what happened here…

And what did Trump do as a result of the first Muslim ban being struck down? Did he admit the ban should not have been implemented and accept defeat? Of course not! After all, he is Donald J. Trump and history has shown his disdain for the courts trying to tell him what he can and cannot do!! So he signed an executive order for a second Muslim ban disguised as a travel ban. Only this ban aims to merely discriminate against peoples from six rather seven countries and has fewer regulatory policies attached to it. All the same, however, even Trump himself admitted it is merely a ‘watered down version’ of the first ban! No wonder a Hawaii court struck it down just prior to its implementation followed by a Maryland court that did the same.

Backtracking to where President Barack


Obama’s legacy was mentioned in the first column––yes, Donald Trump may pick away at Obama’s accomplishments by reversing as many of the former president's executive orders as he can while in the white house but make no mistake about it, history will show that President Obama enacted meaningful worthwhile policies for betterment of the country and the world including loyalty to and admiration for our allies. Meanwhile, Trump used the highest office in the land to enrich himself, his family, and his friends while disrespecting our closest allies and forming relationships with America's adversaries. The contrast between President Obama's respect for the office of the presidency as well as our governing bodies as a whole compared to Trump’s blatant disregard for all three branches of our democracy will be much more than simply stunning. Horrifying may suffice as a more suitable term.

So––No!! Donald Trump will NEVER be capable of filling former President Barack Obama’s shoes because Trump lacks the heart and the soul and the generosity and the temperament and the manhood and et cetera, et cetera, et cetera to do so and trying to convince the world that President Obama tapped Trump Tower to bring Obama down a notch simply will NOT slice the cake in his favor!! Nor will any of Trump's other attempts at blaming Obama for Trump's missteps. Trump can only dream of destroying President Obama as he continuously cries about the comparisons of the treatments of the two oval office occupiers. I say occupiers because President Obama was actually a legitimately elected leader–– a label Trump can only dream of possessing.

When President Obama told Americans during the 2016 elections campaign that Trump was unfit for the office of the presidency, he was not merely speaking from the cuff or talking in hyperbolic terms; and not a day has gone by since November 9, 2017, that Trump has managed to prove otherwise. Take a listen to a few of President Obama's points in the below video.

Watch President Obama's complete remarks on the subject of Trump's competency given during that press conference on YouTube here.

As far as this article goes...

This is my opinion and I'm sticking to it!!

Take a moment to bookmark this site to keep up with new posts, checking back regularly to catch new additions, and following Kitty@RipItToShreds on Twitter. You can also leave comments in the Rip It! Forum to the right!!